The highlight of the Australian music festival calendar, Splendour once again delivered in spades. Punters from across the country camped out to see and be seen at the three-day festival, but let’s be honest we all know the stars of the show – festival shirts. Every man, woman and child donned their best festival shirts and boy was it spectacular.

Splendour in the Grass is an annual winter music festival held in the coastal town of Byron Bay. Also known as where Chris Hemsworth lives. Often compared to Coachella (by the organisers), Splendour is the Australian Mecca for influencers, bohemian hipsters, kombucha infused essential oils and most importantly, amazing live music. A trendy Triple J favourite,  this years lineup was headlined by Tame Impala, Childish Gambino, Foals and Hilltop Hoods not to mention dozens of local and international legends.

Not to be outdone by your average Joe, even the artists got in on the act like Foals frontman Yannis, the Last Dinosaurs and legendary warlock Dr Karl. Hawaiin shirts and traditional tropical patterns were less popular than previous years with some sick retro and fluro vibes splashing the shirts across the crowd

Well seeing as Splendour has already been and gone this year we’ve kinda missed the boat on that one. But you know what? F*ck em – let’s give it a red hot go anyway.

While Splendour is the ultimate Australian festival to stand out for the ‘Gram, it is certainly a little more subtle than some of its rave cave cousins (looking at you Tomorrowland and Ultra). So with that that in mind you want something unique, but not too out there. Enter the Purple Haze. And the shirts good too. 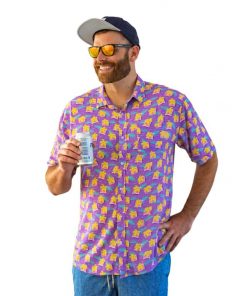 The founder of Kook Island, Geordie spends a little too much time testing out how well his shirts absorb beer while dancing on the table at the pub. Pretty well as it turns out. The tables, less fortunate.